Its getting hot in here in the UK, Keep a track of the temperature using M5Stack Core2, ENVIII sensor and some LEGO Technic.

Its getting hot in here in the UK, Keep a track of the temperature using M5Stack Core2, ENVIII sensor and some LEGO Technic. 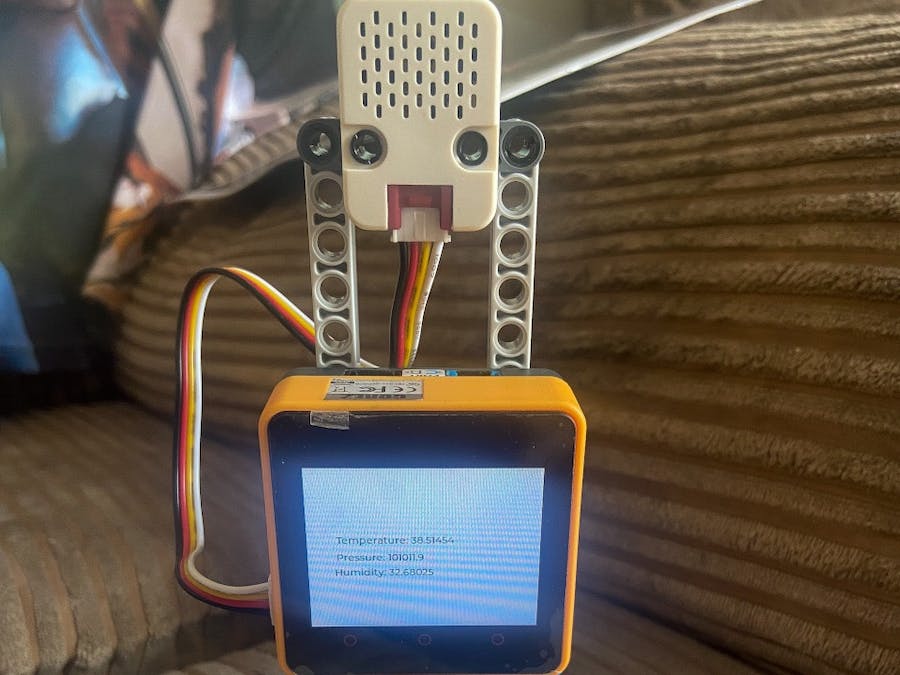 This Guide is part of my upcoming book Prototyping with LEGO® Technic, M5Stack and UIFLow Expected December 2022.

Its getting hot in the UK as we are experiencing a heatwave (19-July-2022). I wanted to leave a temperature sensor down stairs and monitor it from my office.

As I had already posted a guide on using the ENVII and a Core2 AWS to send data online, I decided to rebuild it using a stand made from LEGO® Technic.

As with lego based designs I first built the model with real lego as seen in the photo and then I open up bricklink studio to make the instructions,

First we start with a new Project.

Next add an Axel peg and a friction peg.

Adda 15U liftarm to the back of the 3U connector.

Add 3x 2U friction Pegs in the shown locations.

Repeat the previous steps but mirroring the steps before the 3U connector in order to make a second leg.

Add a 5U liftarm across the top.

5U liftarm added across the top.

Next add 2x 2U Friction pins to complete the lego frame.

2x 2U Friction pegs added to mount the ENVIII sensor.

As with most of my projects, I use UIFLow to program the controllers. For this I will use a modified code that allows connection to M5Stacks EZData service.

The UIFlow code for the Temperature monitor

The Code consists of three labels that appends text to the sensor reading to make them more readable, a block that sends data to the EZData server and a delay block of 100ms. this delay is needed to prevent the memory of the core or the EZData being overloaded from data transmits.

When run you will see the following on the Core2's screen.

If we visit the EZData page we should see the data available.

If you click on one of the data streams you will be able to see a chart of the recorded data.

This is a very simple guide and was made up on the day. If you have any ideas or have made an improved version. let me know.

30 projects • 17 followers
I have always had an interest in electronics but having failed my school exams, it has taken me 20+ years to produce products to share.
ContactContact