A 4-axis palletizing robot arm that is very suitable for industrial education.

A 4-axis palletizing robot arm that is very suitable for industrial education. 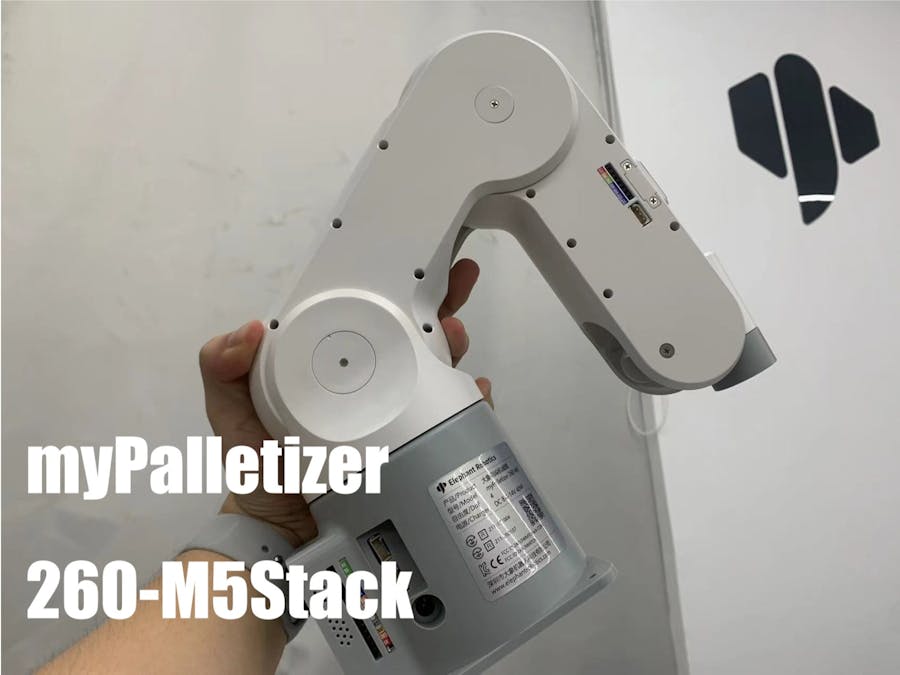 What is the 4-axis robotic arm?

In the era of Industry 4.0, where information technology is being used to promote industrial change, robotic arms are essential in industry transformation. Automated robotic arms can reduce staff labor and increase productivity using automation technology combined with artificial intelligence, voice, and vision recognition. Robotic arms are now very relevant to our lives. Most robotic arms are built like human hands to perform more tasks such as grasping, pressing, and placing. The axes of a robotic arm represent degrees of freedom and independent movement, and most robotic arms have between two and seven axes. Here I will show you a four-axis palletizing robotic arm which is suitable for introductory learning.

What is the palletizing robotic arm?

Let's look at the table.

The 4-axis palletizing robotic arm can only move horizontally up and down, backward and forwards, left and right, with the end fixed towards the bottom. This is a significant limitation in terms of application and is mainly used in high-speed pick-and-place scenarios. Six-axis robotic arms are suitable for a wide range of designs and can move without dead space to reach any position within the field. We will mainly look at the four-axis palletizing robotic arm.

A video was made about the movement of two types of robotic arms.

The myPalletizer robotic arm shown in the video, with M5Stack-ESP32 as the central control, is a fully wrapped lightweight 4-axis palletizing robotic arm with an overall finless design, small and compact, and easy to carry. The weight of myPalletizer is 960g, payload is 250g, working radius is 260mm. I think it is designed for individual makers and eductional using. With the multiple extension interfaces, we can learn the machine vision with the AI Kit.

The suitability of a robotic arm for learning requires several conditions.

● If this robotic arm has a mainstream structure, there will be many models of industrial robotic arms to provide a reference value.

● Supporting documentation for the robotic arm is available and provides the user with basic operating instructions.

What can we learn with myPalletizer 260?

First, let's talk about the forward kinematics and inverse kinematics.

Determine the position and pose of the end effector given the values of the robot joint variables.

The values of the robot joint variables are determined according to the given position and attitude of the end effector.

Elephant Robotics provides relevant information about myPalletizer in Gitbook. There are basic operation tutorials of mainstream programming languages, such as programming in python language, a series of detailed introductions from the installation of the environment to the control of the robotic arm, providing beginners with a quick way to build and use the robotic arm.

We also provide an artificial intelligence kit, a robotic arm is not capable of human work, we also need a pair of eyes (cameras) to recognize, the combination of the two can replace manual work. A camera just displays the picture it shoots, we need to program it to realize the method of color and object recognition. We used OpenCV and python to recognize and grab the color of wood blocks, and recognize and grab objects.

Let's see how it work.

The Artificial Intelligence Kit is designed to give us a better understanding of machine vision and machine learning. OpenCV is a powerful machine vision algorithm. If you want to learn more about the code, you can look up the project on GitHub.

myPalletizer is an excellent robotic arm for those just starting! I hope this article will help you choose your own robotic arm. If you still want to know more, feel free to comment below. If you enjoyed this article, please give us your support, and like us, your like is our motivation to update!