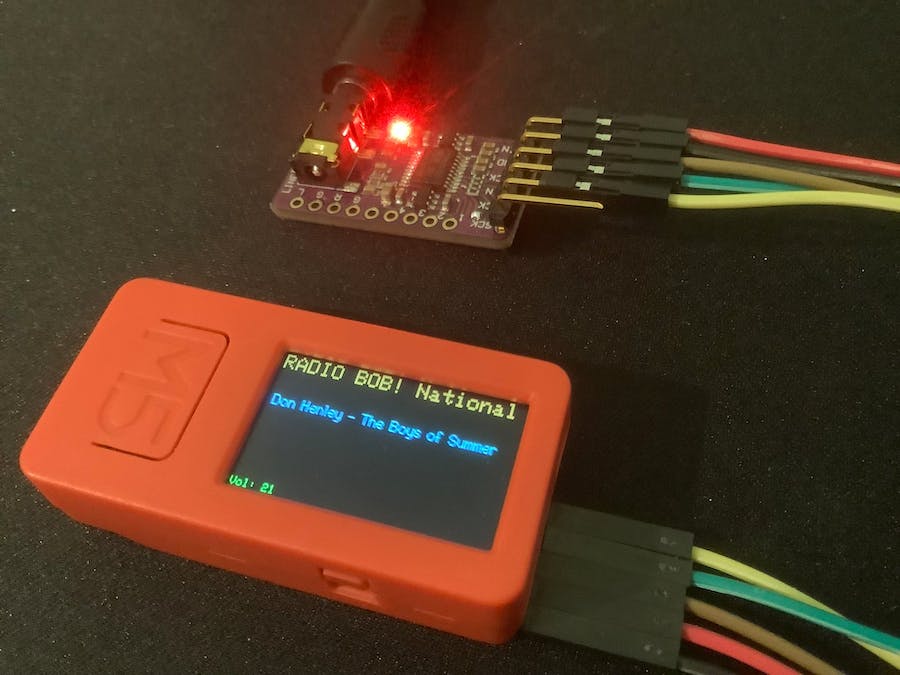 After discovering that my 25 years old Onkyo stereo amplifier is still working, I wanted to give it a second life. An M5StickC Plus (ESP32 pico) which I had obtained some time ago should serve as internet radio player. It provides built-in WiFi, an LCD, some buttons, and I²S output for digital audio. To achieve a sufficiently high audio quality, I decided to use an external digital-to-analog audio converter, the PCM5102A, with a line-out port.

Luckily, some similar projects exist already, and there is a great library - the ESP32-audioI2S - which does most of the work. So the project was feasible in a reasonable amount of time. In the course of the project, I learned quite a few things about audio streaming.

And yes, I really like the result and use it every day! Meanwhile, I have extended the project with a bluetooth receiver mode (Part II) and IFTTT-based song lists (Part III).

I used Visual Studio Code with the PlatformIO IDE for this project. In the platformio.ini file of the project, library dependencies to the M5StickCPlus library, and the ESP32-audioI2S library are included.

The commented source code is available in the GitHub repository of this project. To build the application, you additonally need to create a WifiCredentials.cpp file in the src folder, with the following content:

The following figure shows the required connections between the M5StickC (Plus) and the PCM5102 DAC board (digital-to-analog converter). Two cables are required for powering the DAC board with 5V, and three cables for the 3-wire I²S digital audio connection. In addition, the SCK pin must be connected to GND which can be accomplished through a solder bridge on the DAC board.

M5StickC and PCM5102 board: required cable connections and solder bridge

Some helpful documentation for the DAC board including its solder bridges is available on Stackexchange. Detailed information on the PCM5102A integrated circuit can be found in the data sheet.

The following figure shows a simplified overview of the processing of the internet radio. The horizontal swimlanes represent its major components: the application program, the audio library ESP32-audioI2S, and the ESP32 itself along with its API (application programming interface), the ESP-IDF.

HTTP Communication with the Streaming Server

The host answers this request, for example, with the following HTTP response which redirects the client to a different location:

After the client sends another request to that location, it receives the following response header containing information about the radio stream, followed by the actual audio data:

According to this response, the audio stream contains audio/mpeg (i.e. mp3) data and has a bit rate of 192 kB/s per second. Furthermore, meta data (e.g. artist and song title) is inserted into the stream every 16000 bytes. After receiving this header, the client can periodically read audio data from the connection. The following figure shows the arrival of audio data through the connection.

From the incoming mp3 audio data stream, the esp32-audioI2S library functions extract mp3 frames. An mp3 frame contains 1152 audio samples. In case of a sample rate of 44.1 kHz this makes up a time length of approx. 26.1 ms (1152/44.1 ms). Each mp3 frame starts with an MPEG audio frame header of 4 bytes length. The first 11 bits of the header are sync bits which are always set to 1. The header contains, among other things, the MPEG version, MPEG layer, bit rate, sampling rate, channel mode, and a padding flag. Decoding the header FF FB B2 44 (see figure below) renders the following information:

The byte size of the mp3 frame can be computed from the bit rate, sample rate, and padding flag. With a bit rate of 192 kB/s, a sampling rate of 44.1 kHz and a padding slot included, the frame has a byte size of 627 bytes including the frame header: floor(144 * 192/44.1) + 1. Some examples of mp3 frames from a data packet received via HTTP are shown in the following figure.

Decompressing such an mp3 frame into PCM audio data, i.e. raw audio samples, results in 2 channels * 2 bytes/sample * 1152 samples = 4608 bytes which are passed on to the I²S driver. The I²S driver takes care of sending the audio samples to the I²S controller via DMA transfer. The I²S controller eventually provides a (digital) I²S audio signal at the GPIO pins of the ESP32.

The I²S DAC board connected to the M5StickC GPIO pins converts the digital I²S audio data into an analog signal which can then run through a stereo amplifier, in my case a somewhat older 2 x 110 W Onkyo amplifier.

Outlook on Parts II and III

In Part II of this project, the audio device gets a bluetooth receiver mode in addition to the internet radio mode.

In Part III the artist and title of the current radio song is sent to an IFTTT webhook in order to store it in a list of favourite songs.

8 projects • 4 followers
I am working as a system engineer for embedded systems. One of my hobbies is to build usable devices based on the Arduino platform.
ContactContact