In Part III of this project, the M5StickC (ESP32 Pico) sends the current song title to an IFTTT webhook on button press.

In Part III of this project, the M5StickC (ESP32 Pico) sends the current song title to an IFTTT webhook on button press. 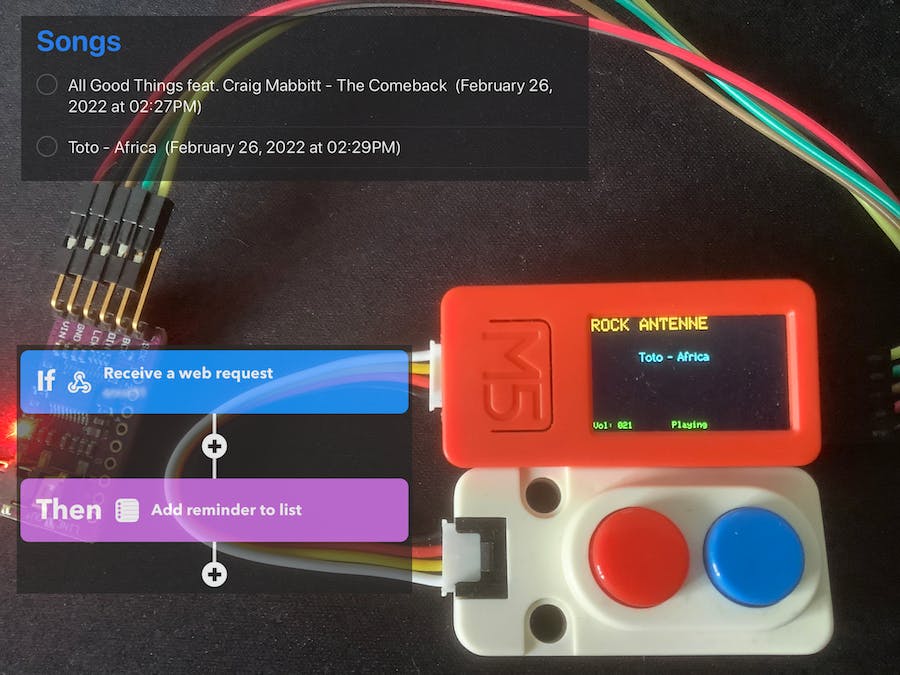 The title image and some of the images in this project description contain screenshots taken from the following apps:

In this part of the ESP32 audio project, the internet radio from the previous parts (Part I, Part II) is enabled to add songs to a list of favourite songs on button press. To accomplish this, the M5StickC device sends the song information to the IFTTT (IFThis THEN That) Webhook Service by means of an HTTP request. The request triggers an action that adds the song, for example, to a list in the iOS Reminders app. Alternatively, you may set various other IFTTT actions such as adding the song to a Spotify playlist.

In addition to the hardware from the first part (an M5StickC plus with an I²S DAC) a button module is used that is connected to the M5StickC using a Grove cable.

The following two basic steps are accomplished in this project:

For being able to add songs to an iOS Reminders list, the IFTTT - automation & workflow app needs to be installed on your iOS device.

I used Visual Studio Code with the PlatformIO IDE for this project. The internet radio application is based on the Arduino framework of the Espressif 32 platform. Furthermore, it uses the M5StickCPlus and the ESP32-audioI2S libraries. Moreover, in the previous part, the ESP32-A2DP library has been used for bluetooth audio.

The platformio.ini file for this part of the project is the same as for the previous part and is hence not repeated here.

The commented source code is available in the GitHub repository of this project. Please note that a WifiCredentials.cpp file needs to be created in the src folder (see Part I of this project).

Additionally, in this part, the file IftttHook.cpp needs to be created with the following content:

Setting up the IFTTT Workflow

The IFTTT platform allows you to define web-based automation workflows, so-called applets, using various services provided by the plattform. Each applet consists of a trigger part (If) and an action part (Then). My applet for this project consists of the following elements:

After the IFTTT applet has been created, the webhook service can be triggered through HTTP requests.

The URL for such an HTTP request has the following format where <your event name> must be replaced by the event name assigned in the trigger part of the IFTTT applet ("add_song"):

In addition, each IFTTT user is assigned a webhook key that can be retrieved either from the IFTTT website as described in the Webhooks FAQ under "Where do I find my Webhooks key?" or from the Webhooks Settings page. You need to be logged in to retrieve the key. The <your webhook key> part of the webhook URL is replaced with that key.

The following code triggers the IFTTT applet and passes the song information by sending a JSON request body to the specified webhook URL:

The JSON request body can be, for example, as follows:

If the request is successful, the host ifttt.maker.com sends a HTTP response code 200 ("OK") with the following response:

When the trigger event is fired, the iOS reminders IFTTT service and the IFTTT automation & workflow app take care of adding the song to the "Songs" list in the iOS Reminders app.

Resulting list with liked songs in the Reminders app

8 projects • 4 followers
I am working as a system engineer for embedded systems. One of my hobbies is to build usable devices based on the Arduino platform.
ContactContact