An M5Stack powered LEGO robot which either drives autonomously or remote controlled.

An M5Stack powered LEGO robot which either drives autonomously or remote controlled. 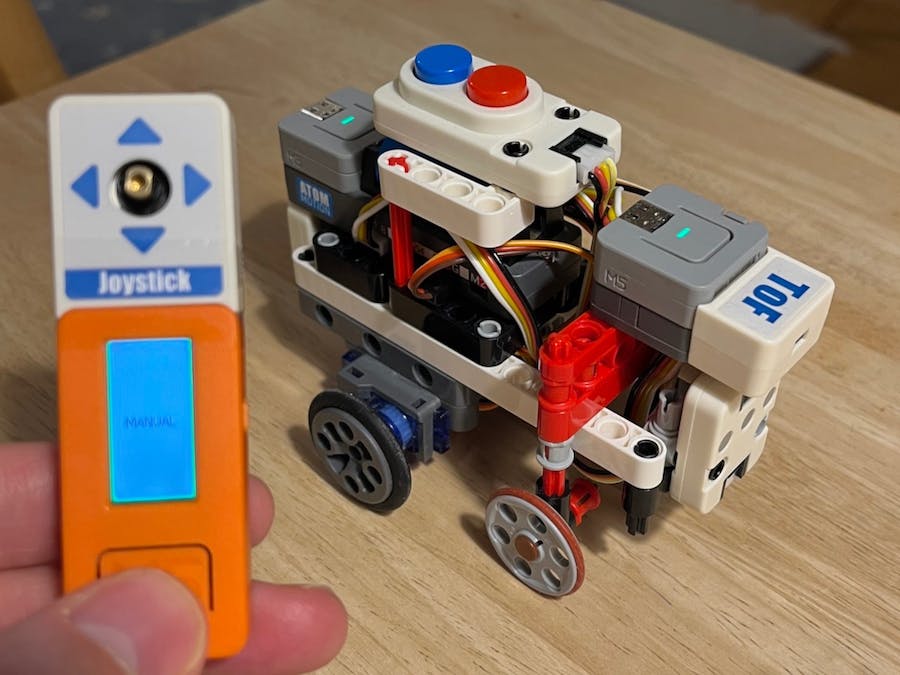 The robot can either be remote controlled from a M5StickC with the Joystick HAT or it can drive autonomously by using the ToF Laser HAT.

Turn on the robot by switching the ATOM Motion switch to on. The two LEDs of the onboard nodes will begin to blink orange until a connection to the configured WLAN can be established.

The LED of the main node will first turn red indicating a stopped state. Later, it will become either green in MANUAL or blue in AUTO mode. The LED on the node of the ranger unit will show either red, yellow or green depending on how far it can range ahead.

Now turn on your M5StickC. It will first try to connect to your WLAN and indicate this on the LCD screen. It will then transition into a screen which allows you to select either MANUAL or AUTO mode. A single press on the M5StickC button will enter the MANUAL mode - a double press the AUTO mode.

When in MANUAL mode, use the joystick to direct the robot. When the robot drives ahead, the front light will shine white and the backlight red. When you drive backwards, the backlight will blink red. Driving left or right will turn on yellow blinker lights on either side of the robot. To prevent hitting a wall, the range sensor is also active in MANUAL mode and will stop the ego device when it detects an obstacle in proximity (8 cm away or less). Try driving backwards in this case ;-) To stop the manual mode, either press on the main button or on the button of the Joystick. Note, that the LCD display will dim down after 5 seconds so pressing on the main button will first wake up the display - press again in this case - or use the Joystick button right away.

When in AUTO mode, the robot will drive straight ahead until it detects an obstacle less than 30 cm away, in which case it will turn either left or right until it sees enough free space ahead and continues to move in this direction. When it traveled for more than 5 seconds straight, it will remember to toggle the turning direction when it approaches the next near obstacle. Stop the AUTO mode again with pressing either the main button of the Stick or the Joystick.

You could activate the two modes also directly on the Robot by pressing the blue button once for MANUAL mode and twice for AUTO mode. Pressing the red button will stop the ego vehicle. The UI on the Stick will then reflect the decisions made by the buttons on the robot.

To turn off the ToF Laser - e.g. when charging - you can press once on the button of the ATOM light to which the ToF HAT is connected. Its LED will then blink white. Press again to reenable ranging.

In the following, I describe the wiring of the different M5Stack components - as far as the LEGO build up is concerned you are free to build whatever you like. Just remember that the robot uses a tank drive system - i.e. to turn left or right it drives the two servos with different speeds (pulses).

Connect the left Servo 360 to PORT S1 of the ATOM Motion and the right Servo to PORT S3.

Finally, connect the Dual Button unit to PORT C of the ATOM Motion.

For the remote control - attach the Joystick HAT to the M5StickC and fix it with a little bit of transparent tape for better mechanical stability.