Pretty accurate port of Sonic the Hedgehog from Sega Mega Drive to M5Stack. (But only first act of first zone.)

Pretty accurate port of Sonic the Hedgehog from Sega Mega Drive to M5Stack. (But only first act of first zone.) 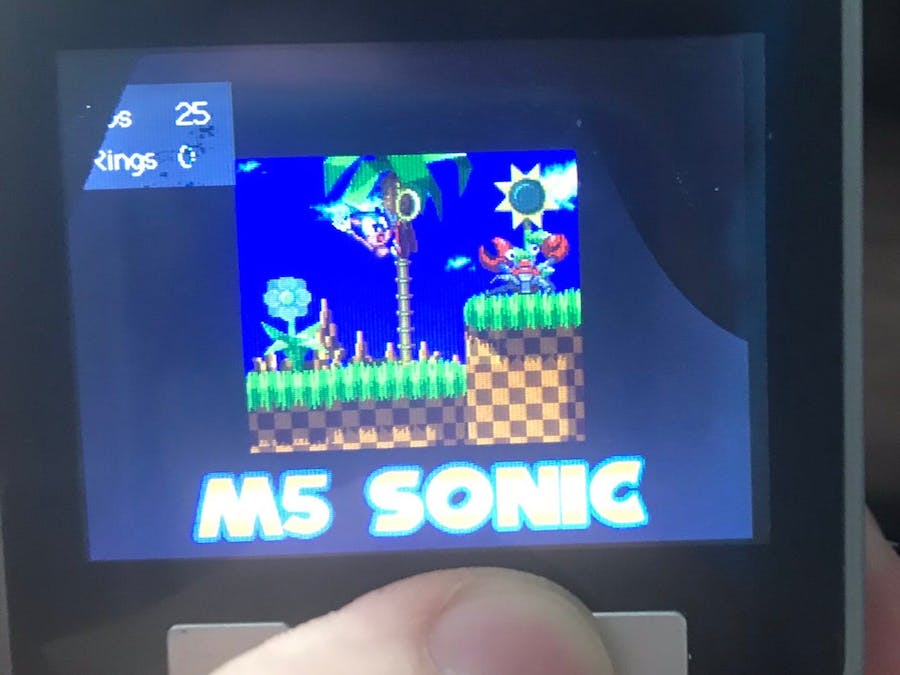 Hello everyone!I would like to show you my progress in creating a platform game on the M5Stack (I know that the device is not intended for this, but why not?).

This project is a fan work, created mainly for educational purposes. All characters and graphics are owned by Sega.

It all started with the usual attempt to make the animated picture move. I created an image with a set of sprites in Photoshop and converted it into a C array, and then wrote a function that copies these specific fragments of this image to the screen using the drawPixel function:

But it was a failure, as you can see, everything flickers when redrawing the frame. In addition, all this has a very low frame rate. I shared my progress on the Russian M5Stack community and wrote the problems that I encountered. And there Konstantin Bredikhin(thx him a lot) told me about the Sprite.h library.

After my first try I spend a week exploring the Sprite.h library. And now I was able to eliminate flicker and increase FPS. Finally, I could focus on the gameplay itself, made gravity, movement along slopes, added the ability to jump. I even wrote in C# my own level editor for this game.

But now another problem has arisen, the M5Stack does not accommodate Sprite with a size of 320 x 240 pixels and a depth of 16 bits. The solution was to use the best possible 192 x 192 16 bit sprite, so after one month, I decided to write my own rendering system.

One year has passed, the goal of making a simple platformer has grown into a full porting of the first level of the game Sonic the Hedgehog. By exploring the source code of the original game, I managed to pull out level mappings, tiles, mask heights, objects positions. Also, thanks to the Sonic Physics Guide, I managed to make physics as accurate as possible to the original game.

Screen now is re-sizable, you can configure this in GameSettings.h file.

if you have any idea how to make game run on resolution of 320 x 200 with more than 24 fps, then you can send me a message to email - vadim.kadyrin@mail.ru

What was NOT implemented?

New rendering system based on palette and index buffer for it. Little example how it works:

You can configure stuff like key mappings and screen resolution the game in GameSettings.h file.