How much negative pressure does a cooker hood create? An attempt to measure the pressure drop with a simple environmental sensor.

Altitude sickness due to cooker hoods?

Altitude sickness due to cooker hoods?

How much negative pressure does a cooker hood create? An attempt to measure the pressure drop with a simple environmental sensor. 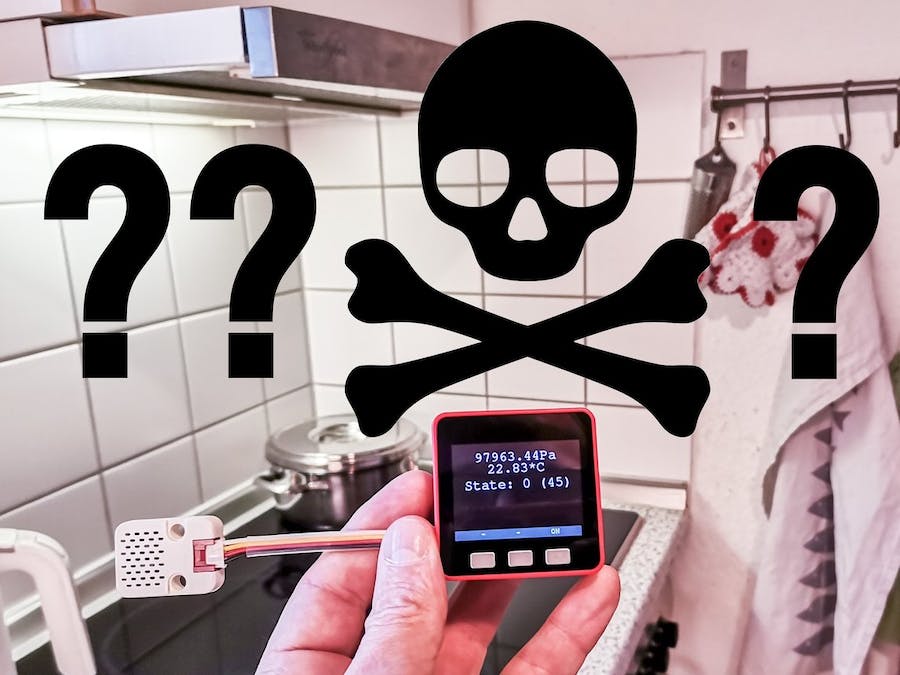 Spoiler alert: The answer is yes and no! But let's look at it in detail step by step:

Altitude above sea level, barometric pressure and the risk of altitude sickness

Measuring the pressure difference with my living room barometer

My living room barometer showed no difference when the exhaust fan was turned on or off. This could either mean that the fan generates very little negative pressure, or that my barometer cannot measure such kind of pressure changes. A digital solution with higher precision would be better.

The QMP6988 is a high precision air pressure sensor. He is used in the M5Stack ENV III unit and I have already used this sensor in my "M5ATOM ENV mini data monitor" project. The datasheet states that the sensor can measure a pressure range from 30kPa to 110kPa:

Pressure Range of the QMP6988 sensor

This corresponds to a range of +9000m (29527ft) to -500m (-984ft) above/below sea level. That should be enough to determine the potential risk in my kitchen. The absolute accuracy of the sensor is +/- 1hPa but the relative accuracy is significantly higher:

Accuracy of the QMP6988 sensor

An relative accuracy of +/-0.039hPa, which corresponds to a height difference of 0.5m (1.6ft), should be fair enough to measure the effect of the fan in my kitchen. The sensor can be connected directly to the M5Stack with a Grove cable and is controlled via I2C. There is a library with which the reading of the values can be done very easily.

M5Stack with ENVIII unit in my kitchen under the cooker hood.

Expected result of the effect of the fan.

Of course, all the windows and doors of the kitchen must be closed. Otherwise, air would immediately come in without the possibility of creating a vacuum in the kitchen. And of course, I expect the data to be much noisier than sketched.

I have written a firmware for the M5Stack, which writes the values of the air pressure sensor to the SD card every 250ms. Additionally I can use the buttons to indicate if the fan is on or off. This is also logged on the SD card. Here are a some screenshots of the software that shows how the data logging works:

Note: The screenshots are made with my M5Screen2bmp() function, which is described in this article.

How the code works

To be able to connect to the ENVIII unit via I2C, first the library has to be included and then the objects have to be declared:

In the setup() function, a file name for the log file is created by incrementing an index until a name is found that does not exist on the SD card. In this way, a new file name is used each time the M5Stack is restarted.

The QMP6988 sensor is then initialized and switched to high precision mode:

The loop() function will look at each pass to see if the 250ms time interval has passed. Then a value is fetched from the sensor, displayed on the screen and stored on the SD card. In addition to that, the buttons of the M5Stack are checked on each pass of the loop() function. If the left button is pressed, then the state flag is set to "FAN OFF" and the counter for displaying the measured values is reset. The right button does the same for "FAN ON".

The data are stored on the SD card so I can analyze it on my PC. I wrote an R script to analyze and visualize the data. The script is attached to this project and there is also a sample file on the github repository, so that you can analyze it yourself.

Result of the first measurements

The good news is that I didn't show any symptoms of altitude sickness during the measurement. However, the bad news is that the data show no effect of the fan. At least there is no visible change of the air pressure depending on the function state of the fan. On the other hand, a clear change in air pressure over time of 0.29hPa can be seen. This is a normal weather-related change in atmospheric pressure. Such changes can be easily up to 45hPa and sometimes even more. Just to get an impression of this value: 45hPa corresponds to a change in altitude of 388m (1273ft). The following graph shows the changes in atmospheric pressure over a period of 35 days in my home town:

atmospheric pressure over a period of 35 days in my flat

The horizontal line indicates the air pressure at the height of my flat over sea level. The vertical line shows the day of the measurement in my kitchen. Clear to see why there is such a huge drift in the kitchen data.

Nevertheless, back to the measurement: Even if I calculate the average values of the individual measuring regions (fan ON / fan OFF) and look at them statistically, no effect can be found. The weather-related change overrides any measurable effect of the fan:

It looks like the cooker hood in my kitchen creates only a very small amount of negative pressure. That's reassuring, because then I won't have to worry about suffering from altitude sickness in the kitchen during cooking. However, this means that the headache I had last week while making mulled wine might have to have a different cause.

But even if it is only a slight negative pressure, it must still be measurable. Therefore, I placed the sensor directly under the cooker hood and repeated the measurement. This time with only 30 measurement points per fan state. I did this to minimize the influence of weather-related changes in atmospheric pressure.

position of the sensor right under the hood

This time, a correlation between fan state changes and measured pressure values can be found in the data:

Even in this data, there is still a slight drift over time: The values are continuously increasing. But because the duration of the measurement is shorter (30 instead of 100 measuring points) and the sensor is placed closer to the fan, an effect could be measured. If we now look at the changes in air pressure between each change in fan state, we end up with the following picture:

Boxplot of air pressure changes for the fan state changes

To measure the effect of the fan more clearly I connected the sensor with a tube directly to the bottom of the hood. A roll of paper towels fit perfectly:

The measurement was then performed again with 30 measured values for fan ON and fan OFF. The data now shows a clear and strong effect:

The results shows an absolute pressure difference of more than 0.4hPa (40Pa). This corresponds to a difference in altitude of round about 3.5m (12ft).

With such a small amount of negative pressure, the scenario that my cooker hood can cause altitude sickness becomes fictitious. And also a look at the data sheet of an cooker hood says that a maximum pressure of only 4hPa is generated at the best efficiency point:

It might have been wise to take a look at the data sheet beforehand, but measuring whether you can really cook without risk is always good - and fun!

So the value might be low but it can still become a dangerous value. Let me explain why:

The danger of negative pressure

Another look at the data sheet says that "Great care should be taken when using the cooker hood at the same time and in the same room or area of the house as another heating appliance which depends on the air in the room.".

In detail: If there is a stove, a fireplace or a gas or oil heating system in the apartment, which requires the room air for burning, then even a negative pressure of about 4Pa can become dangerous! The following picture shows how in such a case the toxic fumes can be sucked out of the fireplace into the room:

Therefore, one should always open a window when using an exhaust hood together with a fireplace. And to accurately determine the negative pressure in such a situation, a differential pressure measurement must be performed. One should never rely on the values of such a simple measurement like I did. You should always consult a chimney sweep. The relative accuracy of +/-3.9Pa of the QMP6988 is not sufficient to exclude such a dangerous situation. More accurate measuring instruments are needed. So be safe and ask an expert!

Real danger or an overstatement of the situation?

Back to the initial question if my cooker hood would be able to create a dangerous negative pressure in my kitchen: YES, negative pressure can be dangerous if you have open fireplaces in your home. Then there is a risk of poisoning from smoke gases. But NO, there is no danger of altitude sickness.

Even if the cooker hood is not suitable for altitude training for mountain trips, it was still very funny to measure the negative pressure in my kitchen with the ENVIII sensor. And I learned a lot, which was also a lot of fun.

I hope you also enjoyed this report...

Feel free to write me if you have questions or suggestions, I am happy about any message.