Use Bluetooth serial to program omnidirectional movement sequences. Make a game out of it and try to guide the robot around obstacles.

Use Bluetooth serial to program omnidirectional movement sequences. Make a game out of it and try to guide the robot around obstacles. 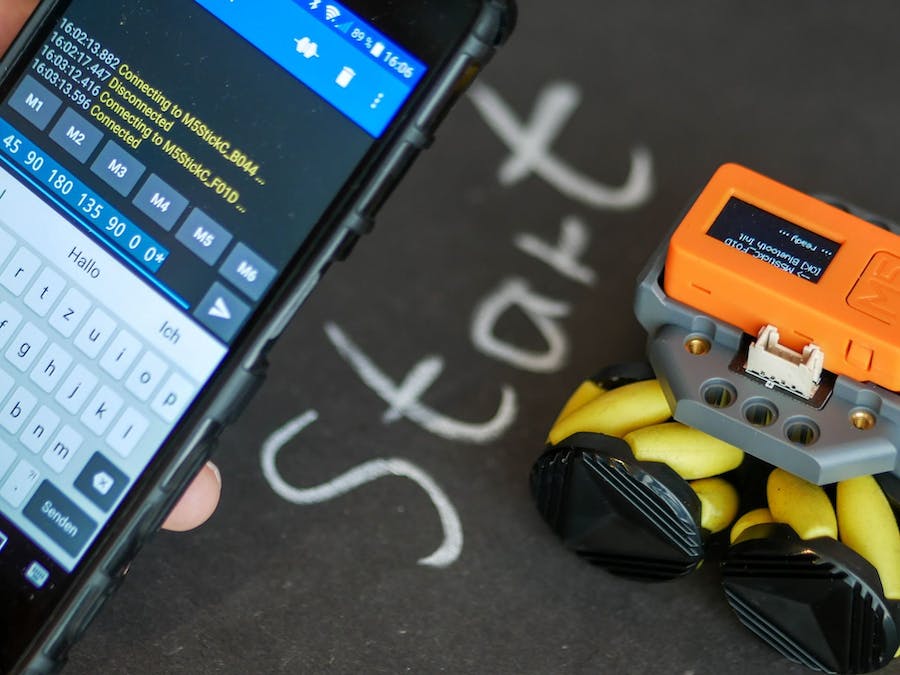 Mecanum wheel robots are fascinating because they have an unusual freedom of movement in every direction. M5Stack produces the "RoverC", which is controlled by an M5StickC (ESP32) and is therefore very easy to program. There are examples with a remote control, but I wanted to create a solution where you can program movement sequences from a mobile phone or a PC. The idea was to create a kind of game where the robot has to be controlled around a number of obstacles. But not with a remote control, but rather by programming movement commands via Bluetooth.

Due to the mecanum wheels, the RoverC can move in any direction without turning (The control of the wheels is explained in detail further below):

A commanded value for a specific direction causes the rover to move in that direction for a defined time. This allows a sequence of movements to be programmed by a sequence of directional values. That sounds complicated, but it is quite simple.

Lets say that the following arena is given and that the rover has to be navigated from start to finish:

To reach the target without driving against the obstacles, the following movement sequence can be programmed:

The motion sequence can be programmed on the Rover via a Bluetooth serial Terminal which is available for Smartphones or PC.

And this is how the programmed motion looks like:

How the command stuff works

Establishing a Bluetooth serial connection with an ESP32 is quite simple:

Then, you will need a name for the Bluetooth device. This can be taken from the Chip ID of the ESP. With this ID the BluetoothSerial can be started and immediately it waits for a connection from a client.

Side note: The code uses my tb_display library to easily create text output on the M5StickC.

Within the state machine, the program waits for incoming characters from the Bluetooth Serial interface. The characters are collected, and each time a space character is received, the value that was sent is stored as a command. An asterisk character (or a timeout of 5 seconds) terminates the receive mode and starts the motion sequence.

To save the commands a <int> queue from the standard C++ library was used. This is located in a separate.h and.cc file to avoid conflicts with the namespace.

During the motion sequence, the top element is fetched from the queue as the new command until the queue is empty:

How to connect to the Robot

First, download and install a Bluetooth Serial Terminal App on your PC or Smartphone.

Then, you need to pair your device with the M5StickC like you will do with any other Bluetooth device:

Now, you can start the Bluetooth Serial Terminal, connect to the Robot and send Movement commands separated by spaces and with an asterisk at the end of the list.

For the whole RoverC the layout is as follows:

vx and vy components of the desired movement

If we now look again at the resulting force directions of the wheels in relation to the base coordinate system, we can calculate the required speed for each motor:

And that's it. The only thing left to consider is an acceleration ramp for the motors. If you switch the motors directly from 0 to 100, the robot will jump and definitely lose its track. In the code, a simple ramp function accelerates the rover slowly, so that it stays better on the lane.

I hope you enjoy the rover and this code can prove to be useful to some of you. Feel free to message me here if you have questions or comments.

13 projects • 38 followers
Just a guy who can't pass by any hardware without wondering how it works. Managing robot based industrial automation projects for living.
ContactContact